Prediction Time - Labour Will Next Nationalise All Schools

Christopher Luxon has taken a bold step for a National leader: He wants to make education a key part of his platform to win Government in 18 months.

For the past 30 years, education has been deliberately politicised by trade unions and the Wellington bureaucracy with a mutual interest in preserving public monopolies in it as well as health and social welfare. Determined to ensure education lifted students out of the poverty these monopolies create, the Governments of the 80s and 90s, and the Key Government, made some successful in roads into these monopolies to bring about an education system run by parents and students not bureaucrats.

Ironically, Labour has been better historically in this mission. David Lange established Boards of Trustees through Tomorrow’s Schools.  Going back further, the Kirk Labour Government cut a deal with Catholic schools in which their special character and property were retained, while teacher salaries were paid by the state.

Reforms by National in education have been weak. The Key Government introduced National Standards, and enabled David Seymour to establish just eight charter schools. Nikki Kaye was attempting reform of the decile system on the way out as Education Minister. Lockwood Smith lost his fight with the unions on bulk funding, and zoning was never abolished, while Hekia Parata was no different when it came to making class sizes larger.

The Ardern Government  Dictatorship is seizing on this vulnerability.

It has set about undermining choice and devolution, using Covid as the pretext on which to centralise everything from Wellington from the health system to the water supply. Whereas Clark and Key never really bothered with debates in this area beyond NCEA, Ardern knows that in order for her experiment to succeed, she must control the education of every student in New Zealand as she reimagines fortress New Zealand.

That’s why it is now all independent schools, and all Catholic schools, which will be the next part of the education system Labour plans to pick off.

Little is known of the policy work being done in Wellington on nationalisation to take all schools into complete ownership and direction of the Ministry of Education. It’s not something the Government has ruled out, or want us to focus on.

Christopher Luxon should shine a light on this. He must claw back urban liberal votes, Act votes, and the votes of parents to win Government in 2023, and those are who stand to lose under this current Dictatorship of history.

He will need a strident education spokesperson with confidence and grit to make the case for choice, competition, and performance-driven education.

They will need to highlight curriculum changes that seek to Maori-fy education, re-writing the history of a nation to indoctrinate the nonsense that your whitey relatives were evil, and your Maori ones, demi-god like victims. If you are one drop Maori, all of a sudden you have a right to this victimhood right through your education and life and an excuse for poor performance and academic laziness.

That National spokesperson must have the tenacity to crush the juggernaught of officials, unionised teachers and other vested interests that will be leveraged by Labour in this fight.

Paul Goldsmith is not this man.  Judith Collins may be this woman.  Along with the most useful function she could currently have in neutralising Ardern's gatekeeper  as the Assistant Speaker of The House.

If Labour can have Trevor Mallard as Speaker, why can't National give Judith Collins their role? It may even appeal to her as it is one of the few jobs she has never had. 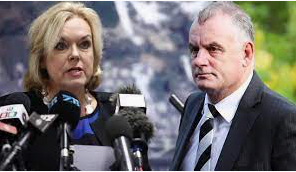 National need to be on a war footing to fight the bullshit indoctrination of curriculum.  Because a war it is, a culture war that natural National voters want to fight.  The suburban housewives that switched to Ardern last election are already scared by the nonsense their precious Olly and Lucy are bringing home as schoolwork.  Imagine when they have to sit next to children at school the parents do not exactly want their children around?

Labour have consistently opposed change, and will stop at nothing to protect their Prime Minister and politicise the hearts and minds of students.