Maori Are The New Zealand Face Of Alt-Right Hate 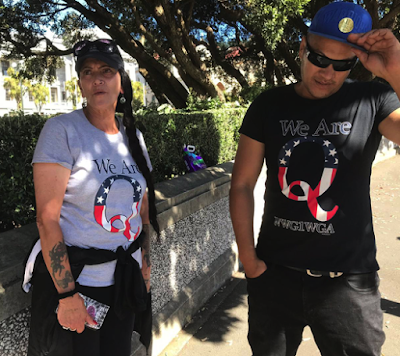 And from one of New Zealand's most creative writers, Matthew Tukaki, in response: Before the protest had started, Māori council chair Matthew Tukaki labelled it an "alt-right, it's pro-Trump" event with nothing to do with freedom. Despite this, neither Te Kahika nor any of the speakers mentioned Trump, the impeachment or anything to do with US politics. Hello Matthew, they are "your" people! Maori. What a mind bending exercise for you to somehow blame cultural imperialism, colonialism and us white folk for this one!! The only link media in New Zealand have to MAGA, Trump and Q-Anon are a rag-tag bunch of Maori pyramid sellers. Yet they still have more credibility than the Maori Party and half the Labour Maori caucus. I say to the Maori MAGA supporters in Wellington - stand down patriots and go have a donut or two in the sun after you have played around on the expensive Parliamentary slide.
Post a Comment
Read more
More posts