Showing posts from February 9, 2021
Show all

We Need To Talk About Rawiri 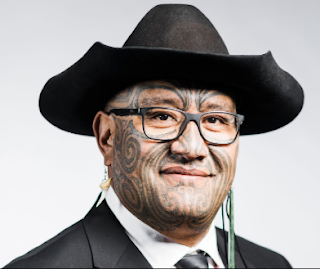 Rawiri Waititi clearly has decided he is going to take the piss. Of all the issues facing Maori such as child poverty, unemployment, covid, housing....... he has decided to grab the headlines "by the pussy" and make us discuss his tie. Trevor Mallard was correct.  Men wear ties. Poor Trevor is not really a fan of the tie. He is more comfie wearing a Union jacket and stubbies. However as Speaker it is his job to ensure a standard.  Trevor Mallard as Speaker is being painted as the Prince Philip of the House.  He is far from it but he respects the institution of the House and if standards drop we will have this issue that Maori will start wearing BLM tank tops as a mark of protest...... My view is that women do not wear ties. But then Rawiri wears a top hat in the House.  It is unusual.  Then Debbie Nitty-Packer wears a tie and a hat. I cannot keep up.  It is confusing. Rawiri has a piece of heavy stone around his neck. Cool, I have no issue with him wearing that or any Maori.
3 comments
Read more

Simon Wilson Was Never Magnificent Even Once; Why Does He Still Have a Column?

You would think that having ass cancer would make Simon Wilson a more humble, pleasant individual, grateful for the woke turn of the world. We know he has had ass cancer as he bored us all witless writing about his plight. Simon Wilson, who sounds like he only visits nice restaurants when he can expense claim them for his boring pithy reviews, has had a backhanded slap at Tony Astle.  Big error.  Everyone who knows Tony even on a superficial local level, knows really why he has closed up. It has zero to do with Covid, zero to do with failure.  These last few years he was busier than he was the pre 87 crash. Auckland was humming and continued to thanks to Robbo injecting $50b in funny money into the economy. In a piece peppered with enough compliments to avoid being edited for being snarky, Wilson fails to recognise there are people out there who can read through his cringing ballocks.  He'd been magnificent, once. Why bother trying to be anything else? So the cooking stayed great a
1 comment
Read more
More posts