Showing posts from September 1, 2021
Show all 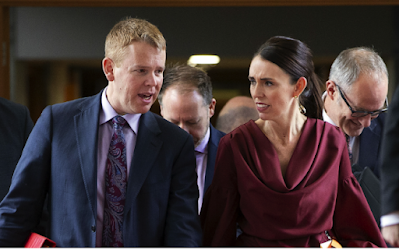 Expat forums are blowing up over this plea from the hopeless Chris Hipkins. This remember is the guy who wouldn't pay extra to get New Zealanders vaccinated sooner as it was "immoral".   This however is an example of the civil service under Labour being moral.  They are allowed to come back "contractually" as it is an "entitlement". Hipkins has told Pfizer to DELAY sending doses and is regularly caught out downright lying many times on his regular slot on ZB with Heather Du-Plessis Allan. Actually - NO. New Zealanders did this LAST Christmas.  They stayed overseas or did not travel overseas, while the team of 5 million were sorted in the "Year of The Vaccine" 2021.  This should all be over by now. Labour have had yet another year to 1. Sort out MIQ - two breaches and lockdowns, the latest caused by the incompetence of allowing returning New Zealand vacationers when Ardern warned everyone travelling in the trans tasman bubble they had to prepa
2 comments
Read more
More posts