Why Aren't The Majority Labour Government Applying A Covid Levy?

So as one blogged at the start of Covid, locking everyone up for two years has to have a judgment day.

We are now at it. 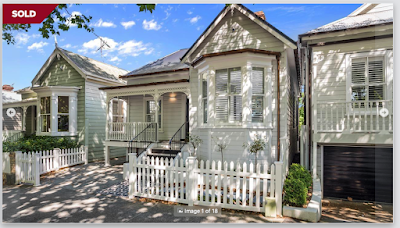 Success in 2022 and 2023 for many families will be paying your rent or mortgage and groceries and petrol as record inflation should equal record interest rates. By law. Where is the 1-3% RBA target by law right now? I say it’s in the same shredder as the Bill of Rights was during Covid. The time we needed both the most.

So who should pay for it?

Well the asset owning classes that have excelled from having billions of dollars of cash chucked at people, have been the owners of property and shares. Markets have been kept afloat by all this cash injected into the economy.

Both markets are living in lala land. Over valued, inflated and ridiculous.  That should worry those supporting My Food Bag.  They have had their shares tank in a time that even a muppet company should be up.

Governments should have an unrealised tax on gains on property and stocks right now. That is measured from March 2020 to now and tax the increase in value of even your residential home (no exceptions) and stocks and tax you all at your marginal tax rate. You are taxed despite not selling. These are gains that Grunter Robertson has given to you by printing $50b, or was it $70b? No one knows!

Call it a “Covid assistance levy”.

As they’ll lose an election.

The left know this. They won’t dare do it although they should if they’re true to their values.  That is why they will now be wilting in the polls.  Their core base can't see an advantage to supporting them if they don't tax the very people who have profited from the misery.

New Zealand currently has a majority left wing government. They can do this at the stroke of a pen.

The left should at March 2020 have tanked house prices and made property and shareholders take the hit. They didn’t. They kicked the can down the road. They were afraid the entire banking system would collapse. Which it probably would but it would have been cheaper to bail depositors out than be at the point we are now.

Someone now has to pay.

Back in March 2020 governments had a choice. They could do nothing which meant you all had to use your “save for a rainy day” funds as they kept you from going to work and draining your bank accounts.

All these bail outs were to maybe save the maybe lives of people you probably maybe don’t even know. The elderly who would have died anyway and the “vulnerable” whomever these imaginary people actually were. Apparently Maori, the poor, the obese, those who haven’t cared about their health for decades. You were suddenly meant to care for them.

The lobby was strong in New Zealand.

Do you care enough to reach into your savings and pay for the damage?

Given the choice at the time of personal financial doom and using your savings versus a wage subsidy, people would have marched in the streets within weeks of being told they would have to pay themselves to stay at home.  The Covid unity in New Zealand was only reached as people did not feel poorer.

Which is why it was never a fair game in New Zealand. Labour printed more imaginary cash to keep people home and cheer on saving the lives of many people who haven’t cared about their own health since Rob Muldoon was PM.

Without wage subsidies etc there would have been a problem. Make no mistake injecting $50-70b into the economy was to prop up the banks.

Every single piece of stupid lending they’ve made and been forced to make by a government intent on looking good by allowing people who really can’t afford to buy their own home - to buy one. To feel rich. To be part of the property class. To be on the ladder of success. To be happy and to vote for Labour.

Judgment day is upon them.

New Zealanders have made more unrealised gains on their own home than they have in their actual pathetically paid jobs. It has happened for years.  $50-70b of printed money has only put this through the stratosphere. So why not tax it? Tax it hard. Your own home, many people I know keep selling and profiting from their family home. Why is it so sacrosanct?

Surely a Labour left government should be doing this.  They have a majority. They shouldn’t be bringing in a wealth tax or a CGT that’s a slow burn. They need an immediate sugar hit of tax. This is a group of people who apparently want to acknowledge the 17% of New Zealanders who are Maori to have co-governance, they use their majority to force that but they won’t tax unrealised gains from printing billions of dollars of cash?

Apply a special Covid levy from property valuations March 2020 to today and tax people at their marginal rates. Easy. No exceptions. On every house. Valuations have been done by councils. Hit ‘em up. If people can’t afford it they shouldn’t be owning their own home really.

Apply a special Covid levy from NZX prices from March 2020 to today and tax people at their marginal rates. That’s very easy to measure.

Why aren’t Labour doing it? They have a majority. They can do this overnight.

If they don’t do it everyone will be paying through soon by even a reported double digit inflation. Noone believes the current advertised  rate of 6.9%.

Even in November  after a couple of months actually doing something I’ve never done before - spending more in a supermarket than a restaurant per week, I could see inflation. I had to go into the supermarket regularly, it was dreadful, I never wish to do it again. Even then it was 15-20% on my weekly purchases, my brain calculates these things at a micro level when pushed upon me and I recorded it weekly with the "fuck off that's a crazy lettuce". It’s clearly gotten worse.

New Zealand locked down and spent like drunken sailors to “protect the vulnerable”. Well the “vulnerable” are going to be smashed with massive inflation or Labour are going to have to smash the middle and upper classes with a one off Covid asset levy.

What’s it gonna be?

Because I’m picking they’re going to hang their broken ass supporters out with the inflation.

And not apply the Covid asset levy.

Which as someone to the right of the knife on the table setting says they should actually do to pay for the madness of their spending.

If they were true to supporting their “vulnerable” classes and not kowtowing  to the Freemans Bay property owning elite.

The Week In New Zealand

Oh Dear.  This is only a week to ten days of action in the state of the nation. It will. Poto "Popo" Williams is basically a nominee gang mole.  She has zero interest in "solving" the gang problem. Willie Jackson is the actual Police Minister. Part Pakeha, Willie does not recognise his actual lineage.  The best thing that has happened in his life is that a relative is Maori.    He has zero interest in solving gang crime, ditto Poto. The problem for them is the closer the gang crime creeps to the nice suburbs the more the majority vote will mobilise and throw them all in the electoral gutter where they belong.  Bring it. The more prevalent gangs are in New Zealand the more the majority will turn on Labour for allowing it to happen. Nothing screams awesome for the centre right vote than the Kings scholarship kid bringing his friends from his previous school to a rich kids party in an $8m Remuera home.  Parents pay upward of $30k to send their kids to this school to ha
Read more 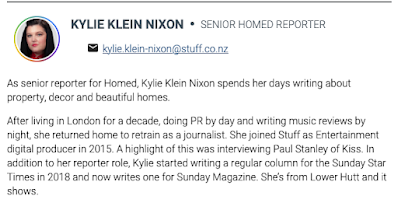 Today Stuff published the most ridiculous column from Kylie Klein-Nixon. In it she made hilarious claims basically apologising for being  white. If she actually is.  She is a "senior homed reporter". Dear lord.  She writes about beautiful homes.  Having lived in London. The coloniser! Her career seems all very “twee” to date.   I will not and never will apologise for being from the coloniser.  I am proud of it. My family history is English, Irish, Scottish and German. Throughout history of course all those parts have fought and fucked each other over ad nauseum. There was never any thought of whining about compensation for such and eternal victimhood.  My first trip to Europe was a proud homecoming of invasion awesomeness.  To see and read where my ancestors would have stomped all over Europe claiming their lands and defending others, filled me with great pride.  In the old days this was sport.  My side won. We won because we were better at it.  This was how things were sorte
Read more