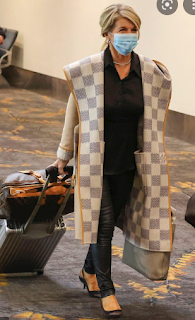 Australia for once is an election cycle behind New Zealand. Last election stupid entitled women with wealthy husbands/fathers/inheritance voted for the left because they liked Jacinda. New Zealand men were too weak to stop that. These women are now regretting this.  The surge back to National shows this. Australian women seem to in the words of clothes horse Julie Bishop, be angry. Bishop only ever achieved the heights she did because she has legs for Africa and would look good in a potato sack.  The woman was not especially brilliant apart from this. There were many Liberal women smarter and better qualified who were overlooked during her time. Here is the Bish walking to her appointment on Australian media wearing the most hideous LV coat made in history.  Something you would expect Beyonce to wear after yet another time Jay Z side-eyed another woman. Julie's conclusion appears to have been drawn after listening to a mentally ill young woman who really only has achieved fame as s
2 comments
Read more
More posts