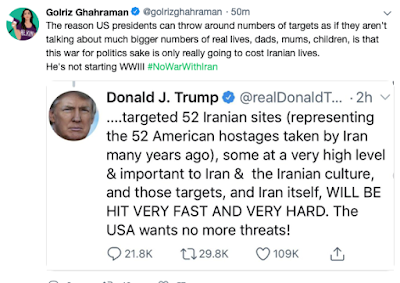 I have waited a tolerant 24 hours before referring to Golriz Ghahraman's twitter for the anti-American garbage she is about to launch. I was not disappointed. And the left are worried about an alleged Chinese spy in the National Party...... I will leave it to you to decide what side GG is on, as it will not be New Zealand's or with its Allies should war break out properly on the dark forces in Iran.  Retweeting potshots at our Allies like the good pretty little traitor she is. Oh dear "right wingers" will be unfollowed by Jack McDonald.  Shit that will learn them Jacko! I have politically active Jewish liberal friends saying that we should preach love to Iran.  Yes, like politically active Iranians will be to Israel right now. GG has painful memories of the Iran/Iraq war. I doubt that at all. She was nowhere near it.  She was as close to the Iran/Iraq war as I was to the Tangiwai Disaster. Didn't she and her fam
1 comment
Read more

Seriously?  China 101. ANYONE connected to Mainland Chinese politics that you meet in business and through trade connections is likely at some level to meet the Western definition of a spy. To have Martyn Bradbury, a man, how shall we say it, "on the closer side to supporting Communism than Capitalism anyway", get his undies in a knot about this is, well it is very very funny. If Jacinda Ardern was open and honest with her diary over the years I could guarantee with some retrospective due diligence she has met Chinese people who have such links.  They would have lined her up years ago as a future leader and have many embarrassing photos of her standing next to their operatives. I wrote earlier last year about Andrew Little being wise to use a burner phone while in the Mainland. I had a full series on Huawei and their ability to spy on our MP's ad journalists. Winston Peters? Well during his time in MFAT there is absolutely zero
Post a Comment
Read more

We All Know Who Will Be Playing Qassem In The Movie 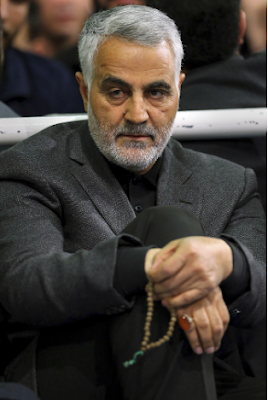 The problem is that Hollywood liberals will cast the prick as a hero rather than what he really was.
Post a Comment
Read more

Virtue Signalling 2020 Styles - The WAG and The MP Compete

I like Hannah Barrett, she's always surrounded by beautiful people, has thin fabulous friends while always virtue signalling "body positivity" for other women she is never photographed near and is of course the wife of Beauden.  Every day it seems she wakes up and thinks first of her brand. This is from her instagram story early morning. I also like that she does not let her sadness at social issues and feeling 'devastated" and "helpless" get in the way of her enjoyment to sink happy hour piss with her mates in Thailand with Beauden while he is on sabbatical.  Proper. This brings me to the Australian fires, which are terrible I just put that out there.  However they have been happening for as long as I can remember and every Australian I speak to in Sydney and around parts who has a practical, manual job or has common sense (in other words is n
Post a Comment
Read more 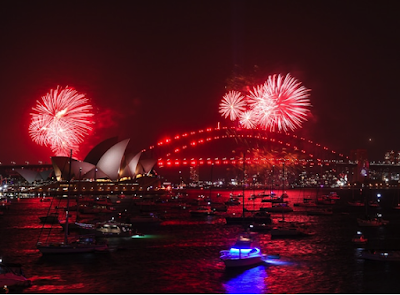 Snowflake fools wanted this gorgeous celebration of awesomeness cancelled because of the fire hazard, then when they realised the fireworks were not going to burn the city down, they called it insensitive. Good grief. If the people of Sydney needed some respite from what is happening currently this was it and a jolly good night of intoxication and class A substances.   Well done Sydney for not caving in to the haters and the snowflakes. I cringe at what the New Zealand reaction would have been to a similar set of circumstances.
2 comments
Read more

Nothing Says Happy 2020 Than A Virtual Challenge! 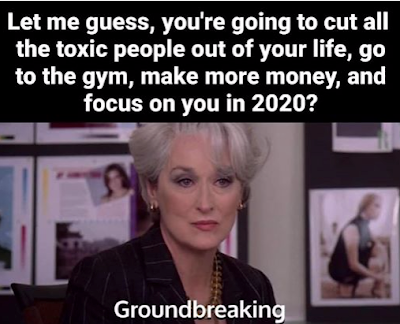 Yes we are all over it by now but that was NY 2020.  Well done.  Made those meaningless expressions of self-betterment on social media yet?  This has been my favourite circulating currently. I would add "inspiring others and setting scarey goals" to the bleedingly obvious. Nothing I have seen says what world we live in currently where there is now a virtual challenge involving you logging distance to complete challenges - without actually ever having to travel to the places mentioned!  Brilliant.   It is called The Conqueror. For example travelling Route 66 without having to go to the USA.  This one would be perfect for Kim Dot Com.  Not only can the forgotten colossus never have to go to the USA he would end up after 2,280 miles of exercise, possibly very fit.  Well not, he is such an evil genius he would cheat and attach a fitbit to all of his children and animals in order to get the mileage wouldn't he? You can "swim the English channel&qu
Post a Comment
Read more 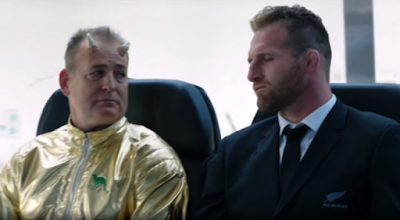 Kieran Read is not an "All Black Great".  There have been better number 8's and better Captains. Richie McCaw is.   Here is why: Read revealed in his autobiography Straight Eight that, despite countless hours spent training and touring together, they were basically strangers outside the world of rugby . "It was the ultimate professional relationship, a workplace friendship. I think back to the first time we roomed together, in Sydney with the Crusaders in my first year with the team, and he never once asked me a personal question about my life, family, interests - anything outside the team. "It wasn't that he was rude; that information was just superfluous to him. He didn't need it in his head when he had other things to think about." Nah there was plenty of room in Richie's head he was the book smartest guy in the team, he just didn't care to make silly irrelevant small talk.  He knew that not only did he have to b
Post a Comment
Read more
More posts