I do not know who Finn Hogan is or what year his Mummy took nappies off him and let him grow a Jesus beard and hair, but this piece of journalism really is something special. Calling Marilyn Waring a "leading economist" as some sort of authority to speak against every argument against CGT is a bit like.......well I cannot think of any analogy to describe it.  I am speechless. I know I have been living out of NZ for a long time but has the country gone to such rack and ruin that Marilyn Waring is now a "leading economist"?  NZ's economists must now be utter gobshite for that to have happened. "Every single argument was heard in every single European country that introduced it. They're tedious now, and I’m interested in a far more equitable revenue asset base. That should mean being able to make changes in company and personal tax as well." The arguments are repeated because they are all correct. And what a surprise, Warin
1 comment
Read more 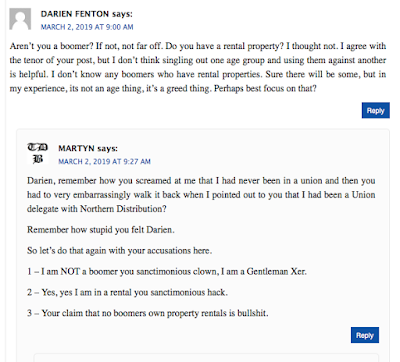 I will break the rules here by linking to a left-wing blog (you know because blogs are now so much fun and well read we cannot actually point out posts on "opponents" blogs) but this is a beauty. You cannot get much more tribal leftist than Martyn Bradbury and commie unionist Darien Fenton.   Enjoy this exchange of the pinkos. First up Fenton calls Bradbury old enough to be a boomer if "not far off".  The age range is 1946 to 1964. Martyn is a good decade younger than that lower range.  Then she taunts him for not having a rental property. Martyn gives her a jolly good slap back calling her a sanctimonious clown, sanctimonious hack and then another seeing to.  Fenton was an MP from 2005 to 2014. Here is her pecuniary interests in 2014 Here is what it was in 2005 You be the judge of the winner of this argument between them.
Post a Comment
Read more
More posts