Married Man and Woman Have A Baby - Grandfather Is Unwell 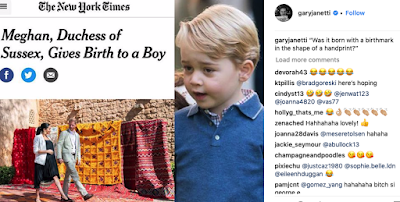 Anyone following Gary Janetti's Instagram knows he is the best thing about the Royal Family currently. Prince Harry used to be the best thing about the Royal family. However since he has turned into a balding, vegan greenie, yoga practising, warmist, screaming cuckold of a ginger, we have had to look elsewhere for inspiration.  Prince George hopefully is it.  Harry seems to have even made the cardinal sin of letting his mother-in-law move in to "help" with the baby.  They have a staff the size of a division at the HMRC, what on earth is she going to actually do other than be like most mother-in-laws and get in the bloody way? Today Harry stood to one side and Meghan did all the work and gave birth to a boy. That yet to be unnamed boy is only seventh in line to the throne (and dropping in rank the more Kate breeds like a race horse),  but Meghan has secured her future and now she can behave as badly as Sarah Ferguson, safe in the knowledge she is forever tied
Post a Comment
Read more
More posts