The Day of Trump 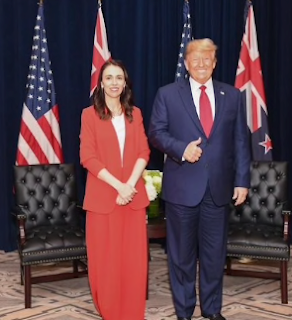 Ardern looking like she would rather be headlining a National Party conference.  A royal handshake from Trump Good news, Jacinda Ardern and New Zealand got Nice Trump today.  Despite Ardern knowing full well The Donald hates it when women wear pantsuits and turning up in a curious outfit in Republican red colours, he behaved himself. Everyone seemed confused about the status of our meeting , the New Zealand contingent caught offguard when the Americans called it a pull-aside rather than how they had been selling it as a bilateral.  I suspect our team got it right and the Americans just changed their mind.  We ended up with fewer minutes with Trump than countries most New Zealanders could not locate on a map.  However with Trump maybe less is more. He will never have a closer relationship with New Zealand while we send over Jacinda Ardern and not Sir Bob Charles. Next year we put the 83 year old on a plane with a bag of Callaway's.  Trump has given us plenty of hints
2 comments
Read more
More posts