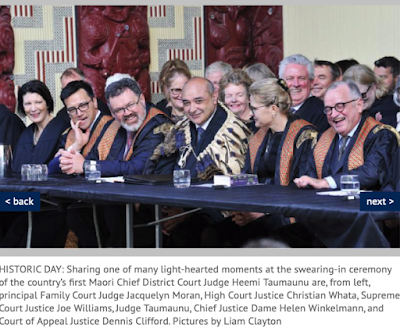 I do not like the word crisis, it is overused.  I like to save it for special occasions and here is one such one. Just a day after news was released that the President of the Supreme Court, Chief Justice Helen Winkelmann   used a recent speech at The Northern Club to announce that Judges needed to come from a wider variety of backgrounds, she got her wish for them then to act accordingly. Who is laughing now? The latest appointed to the Supreme Court in May, The Hon Justice Joe Williams, has just six months later thrown not as reported a legal curve ball but a large hard  knuckle ball firmly at the head of the whole New Zealand legal establishment.  This would not matter if he was a lower ranked High or District Court Judge, but saving this for the Supreme Court means it has to actually be dealt with seriously. Least I suffer a zillion politically motivated complaints to the Law Society from the usual fucktardery of suspects, I cannot possibly react to his comments in
1 comment
Read more

NZ First and The Trading of Scalps

Less than three months later Maybe Soper can ask his mate Peters whether his first story was true because if it was (and Barry Soper would never write anything next to his name before he can stand it up), wouldn't that indicate perhaps his coalition negotiations were never in good faith?  Peters had zero evidence going into the proceedings Bennett was the leaker.  Was the "scalp" of Paula Bennett discussed at any time? Someone claiming to know Peters well enough to judge, Richard Griffin, over the weekend was furiously claiming: That is neither the politician nor the man. Revenge, served cold or otherwise, is not Peters' modus operandi. Any number of present and past politicians who have been rolled by the leader of New Zealand First might claim he has been lucky, manipulative, cavalier and just too well dressed for them to deal with. None would claim he is arbitrarily vindictive. Paula Bennett may (cough) have a differing view.
Post a Comment
Read more
More posts