The Sopers Dying In A Ditch For A Sex Pest 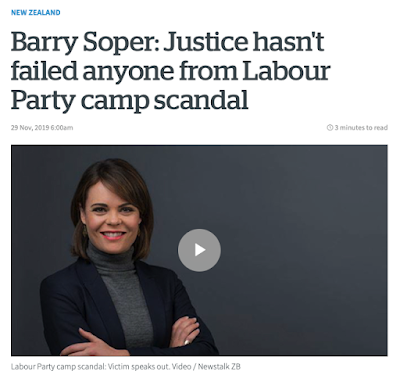 Oh dear I just have to ask why are Barry Soper and wife HDPA dying in a ditch for a sex pest? I have one question someone needs to ask Barry. That's what happened at Labour's summer youth camp early last year: a drunken yobbo falling over and groping four 16-year-olds and apparently being deeply remorseful, unable to remember it the next day If thee who cannot be named fondled, groped and pashed his wife, what would his reaction be? Because I know Barry Soper not well, but well enough from my times with him and definitely respect him as a man and complete gentleman around women especially his own wife, to know the answer. Thee who cannot be named would be decked on the floor instantly crying to his father. As any self-respecting husband/partner would do to another man/boy trying that on. So stop pretending this incident of which there are numerous occurrences should go through to the keeper and somehow the victims are over-reacting!
Post a Comment
Read more
More posts