Showing posts from December 5, 2019
Show all

Winner Of The Nobel Prize For Political Ineptitude 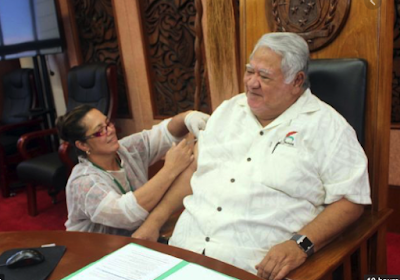 Yesterday we had outrage over a cartoon where an editor and a cartoonist were called all manner of names and had their jobs threatened. Today Prime Minister Tuilaepa Sailele Malielegaoi of Samoa continues on his merry way given a free pass from media completely. Forget our part-time PM Jacinda Ardern, Prime Minister Tuilaepa Sailele Malielegaoi surely must now win the prize for worst world leader of the year.  He has just done the impossible and made Ardern look like well........I cannot think of something grand enough.  There is not even a champagne I like enough to compare this to.  He is even making Trump look like a responsible rationale human. Quite why he hasn't already resigned in shame is astonishing, as the death toll rises in Samoa from an entirely preventable disease.  A Japanese PM would have already literally fallen on his own sword and killed himself over this such is the shame. Today we learn though that the Samoan PM was only vaccinated himself YESTERDA
1 comment
Read more
More posts