Black Caps Scoring More Runs Off The Field Than On? 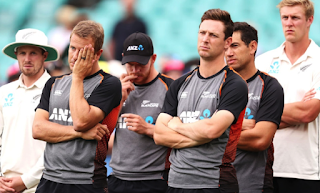 The first man is well and truly down from the ill fated Black Caps tour of Australia where we lost were annihilated 3-0 in the tests to the Aussies. No, no, no, no. And it is not the poorly performing Mitchell Santner, Jeet Raval or Tim Southee. Yes, a member of the support staff closely ingrained in the team through relations, has disgraced himself by circulating on social media (accidentally I am sure), a picture of a young lady very naked.  The venue looks very much like a hotel room, where we are left in no doubt that it was taken against her wishes as she is not posing at the camera.  I have seen it and will not republish it in any form as it only re-victimises the woman in it not him. Good on ya mate.  Was it your score? Or one of your buddy's in the team that has been circulated? I could not care less if anyone has had consensual sex with a young lady/hooker/grandmother.  Such activity is well prevalent on sports teams and travelling around unaccomp
Post a Comment
Read more
More posts