Max Ritchie Should Be Applauded Not Shamed 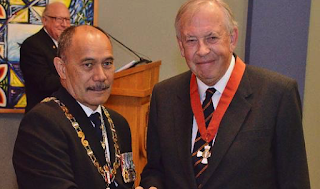 Matt Nippert has reported a shabby hit job on some chap called Max Ritchie. The Charities Service investigation was spurred by complaints including from one staffer who claimed excuses had to be made for his absence when donors called while he was out on the greens, according to investigation notes. In other words, he didn't get along with a stage member and they ratted on him. The old tusker negotiated his own terms of his contract, worked for four years here (in total 23 years at the Foundation) and played a hell of a lot of golf.  No one seemed to notice or mind that he was away that long until a staffer ratted on him.  Perhaps s/he/they were pissed off that they too could not play golf. They chose Ritchie for the job clearly because of his ability to network and drum up funds.  He was in his mid-seventies when he was given the job at $160,000 per annum.  They were not choosing him for his energy and drive in the role.  He was then and is now, an elderly man.
7 comments
Read more
More posts