"Heather From Papanui" Pops Up In Election Year - Where is the "Muslim Boy in Kilbirnie"? - UPDATED 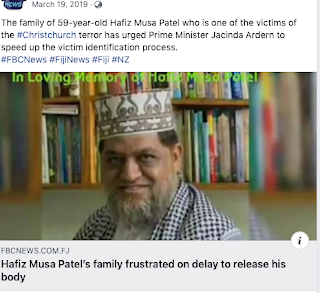 The election year narratives are already ringing out.  The chances are this one may be a bit more real than last year's "Muslim Boy in Kilbirnie" that the media have completely ignored a hunt for. Last September the PM spoke at the UN and came up with this: "One example sticks in my mind.  It was only days after the shooting and I visited a mosque in our capital city. After spending some time with community leaders I exited and walked across the car park where members of the Muslim community were gathered.  Out of the corner of my eye I saw a young boy gesture to me.  He was shy, almost retreating towards a barrier, but he also had something he clearly wanted to say. I quickly crouched down next to him.  He didn’t say his name or even say hello, he simply whispered “will I be safe now?”" She mentions nothing more about this child other than the following: The young Muslim boy in Kilbirnie, New Zealand, wanted to know if I could grant him all of
Post a Comment
Read more
More posts