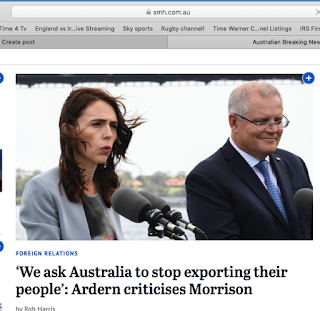 In the most astonishing move of the election year, Jacinda Ardern has come over to Sydney with the Opera House in the background and taken an elephantine size dump all over our Transtasman relations and closest relations. Not over anything important. She is dying in the Foreign Affairs ditch over Australia handing back our crims.  But let us analyse this for a second. Surely we should start handing back Samoa's, Tonga's, Papua New Guinea's, China's, Fiji's..........the list goes on of shit hole countries exporting their crims to NZ that we do not need to have responsibility for once they complete their sentences? I have some respect for her manning up to Scomo.  The language used by her was the strongest I have ever seen in my lifetime against an allied power of ours!  Not lost, right in front of Australia's largest landmark. MFAT officials will now be knee deep on a Friday night in the darkest of hotel bars inhaling scotch on the rock
4 comments
Read more
More posts