If You Ever Thought Appeal Judges Were Paid Too Much...... 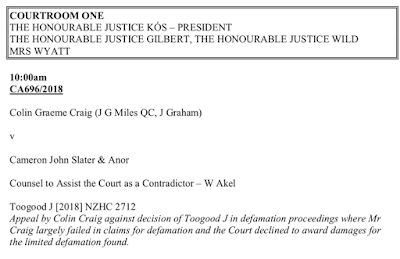 Hello guess who is back? Colin Bloody  Craig Fortunately adults appear to now be firmly in charge to the point (very) senior Media and Defamation Barrister Willy Akel has been called in to go through the ever getting blacker pantomine of yet another Colin Craig appeal, this time to the Court of Appeal. The perennial nitwit Craig is arguing essentially through an expensive adult in Julian Miles QC, that he should receive a payout from someone with no money left to pay him. Akel has been appointed to the very rare "Counsel to assist the court as a contradictor".  In other words - the expensive adult Colin Craig will end up paying for when he loses the appeal, to currently act against him.  Confused? Yes...you will not be the only one. The President of the Court of Appeal has already given a fairly good indication of how this is all going to go for Colin Craig. But Justice Stephen Kos said Craig's reputation was also badly affected by informatio
Post a Comment
Read more
More posts