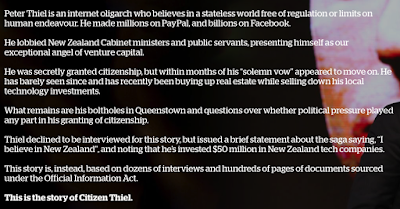 A businessman called Troy Bowker seems like a great member of the VRWC, vast right wing conspiracy and fine bloke.   He has in the past been accused of such deeds of paying to attempt for Stuart Nash to be a break-away party leader via an intermediary the left believe to be Voldamort.  Bowker has recently put forward an idea that a compliant journalist has rather curiously propagated . 2,000 rich people put in $50m for businesses creating jobs in New Zealand and in return get a pathway to a New Zealand passport. You are not only absolutely dreaming if you think New Zealand can raise a Dr Evil $100,000,000,000, you are very out of touch with how the World's Mega-rich think they should be able to live and what they get for their money.  Bowker will not be out of touch at all, so he is here just having a lend to see how this will run as he spends time wasted on his couch during the lockdown dreaming up ways for capital for his funds.   We are not here talking about att
Post a Comment
Read more
More posts