Let us analyse the real cost of this Covid-hysteria and Labour re-election fund to have New Zealand follow this ridiculous elimination strategy rather than the original "flattening of the curve". 81 cases caught at the borders 30,000 people using the managed isolation $80m dollars spent so far - $1m spent so far per case caught - .27% (yes - point two seven percent) of people tested positive for Covid-19. A real user pays scheme would refund your dosh if you did not bring Covid-19 into the country.  A real user pays scheme would also make a compensation payment to you for completely unnecessary detention when you can provide a test before getting on a plane that you are covid-free. Because based on these statistics it is little wonder the UK has shelved any formal plans and other countries do not bother. Meanwhile the Labour government were happy to write a cheque for $37.6m for foreign temporary migrant workers who should not even still be
5 comments
Read more 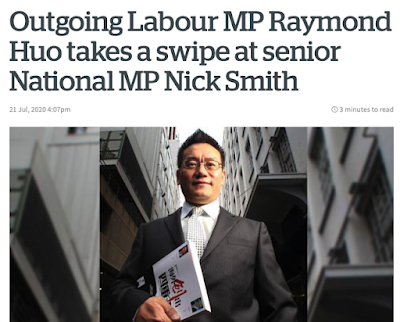 Good lord. Nick Smith is one of the most inept, time serving goobers in the National Party. If you cannot handle Nick Smith as an Opposition MP then YES you should leave. I mean people in the National Party have probably left because they did not want to work with him over the years!!! "Each time I saw Nick Smith's face, it's a reminder that it's about time for me to retire from politics," he told the Herald. But he further elaborated when speaking to the Herald, saying run-ins with Smith on the justice committee played a part in his decision to retire. Maybe Huo has that subtle bad taste sense of humour the Chinese are known for with their occasional mangling of the English language. Smith's own colleagues should look at Nick Smith and realise they should not stay in politics that damn long. Maybe Huo means that. In any case it is sad to see another Mainland appointee recalled, returning to civilian life. Anne-Marie Brady will miss
1 comment
Read more
More posts