With perhaps the wisest, most honest and enlightening words in an election campaign in years, Stuff commenter ScottJ sums it all up: Imagine how we could just save on the the millions of man and woman hours, trees of analysis, pollsters, punters and experts if we cut to the chase and accepted that this IS politics in 2020. ScottJ has the hammer and hit the nail nicely.    Politics is no more complicated outside the beltway than the above.  Aspire to be the least annoying.
Post a Comment
Read more 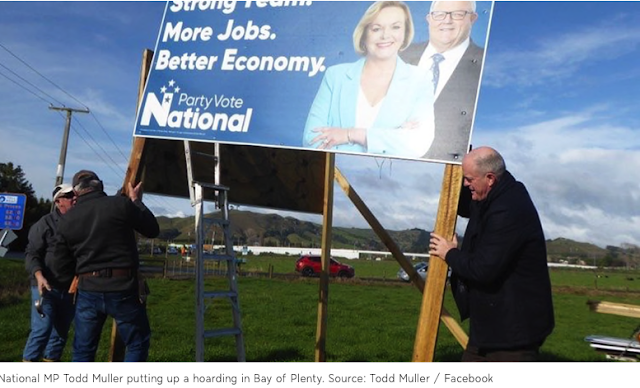 Sometimes a picture does not tell a thousand words. It tells an entire library of words. I am still contemplating here what was the greatest tragedy. Meanwhile -  Nuwanthie Samarakone is running now officially the best campaign I have seen in my life by a National Party candidate for anything. I wrote about this the other day. She's given Shayne Currie the opportunity to publish a headline that mentions 1. The National Party 2. A female 3. A QC 4. Allegations she is a Stripper Chloe and Helen have not got a chance, Nuwanthie is running this campaign without a billboard of her in sight.  Nothing says brilliant than as a female and ethnic minority  in the community, hiring the oldest, whitest, most establishment bloke to beat the opposition with!   A letter written by Miles said: "The campaign even suggests she has been a stripper coupled with the clear, and vicious, imputation she has been involved in some sex scandal and likely to
1 comment
Read more
More posts