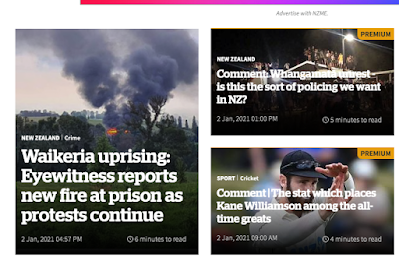 So a man whiter and more middle class than most of us in Matthew Tukaki, has taken it upon himself to call for calm, instructs our elected politicians not to intervene and to let Maori deal with riots where the animals have taken over the zoo. Executive Director of the council, Matthew Tukaki said politicians should stand back and let mana whenua work with Corrections, the prisoners and their Whānau to resolve the situation. Well that didn't work out so well for the taxpayer when thugs egged on by Pania Newton occupied a piece of privately owned land.  It didn't work out well in pretty much every other recent situation including the intimidatory roadblocks during Covid. Who says those in the riots are even all Maori? Race is not and should not be an issue in this.  Labour's worst Minister Kelvin Davis is in charge of corrections and he will not do anything. Prisoners have taken over a prison and no one is bloody doing anything about it for almost a week now.  Nothing to do
Post a Comment
Read more
More posts