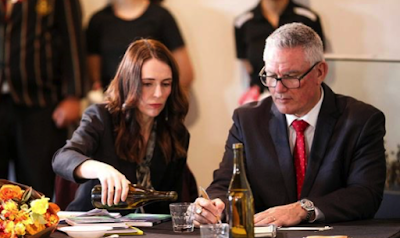 Kelvin Davis is a dead man walking. A little known Maori MP with a painted face and huge attitude just pwned him. Davis had one chance to take back his portfolio on day 1 with rubber bullets and tear gas and take back  control of HIS prisons. He did not. Far left Maori now not only can road block roads, they can take over a prison using Australian bikkie gangsters who have only just arrived in the country after being so awful that even the convicts in Australia didn't want them. The Minister of Corrections is now a Maori Party MP - Rawiri Waititi.  He left whatever holiday he was having and did the business.  He made Kelvin Davis look like a pissweak fool.  We are only three days into 2021 but this was the best political play we may see all year. For years the centre right have tried to get Davis sacked.  There have been better examples where he should have been,  Ardern demoted him from a sure Deputy PM slot, but now he has proven not even worthy of his demoted position. Relatives
2 comments
Read more
More posts