Our Fearless Leader Arises From Her Holiday - To Tweet 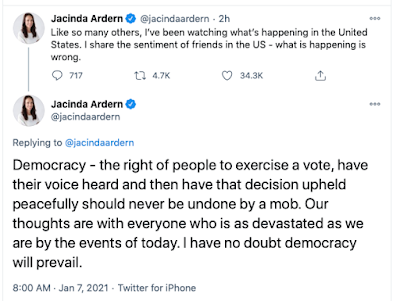 So let me get this right, of all the issues she could be passionate about: Silent on BLM/Antifa riots burning down USA cities in the run up to the US election, silent on thug prisoners burning down prisons in her own country after a riot and siege just last week , silent on rising child poverty, silent on rising homelessness and ridiculous property price rises. But immediately jumps on Twitter under the guise of "sentiment of friends in the USA". These must be the same "friends" who advise her on everything like when to close the borders! Anything for an opportunity for an international headline with no downside. Anything to bring in "friends" to justify not doing anything herself. Absolutely hopeless doing anything about the problems in her own backyard. Make no mistake, had Donald Trump managed to actually win the election and retain power for four more years, The Capitol would have been the least of the problems. Whole USA cities would have burned to
4 comments
Read more
More posts