When Maori, Chinese and Indians Collide 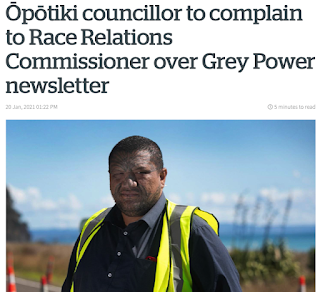 Popcorn for the rest of us. Let me summarise. Ōpōtiki councillor Louis Rapihana said he was angry with comments in a newsletter circulated after the Whakatāne Grey Power meeting he spoke at late last year. "I will be taking it further … I will be sending a complaint to Race Relations Commissioner Meng Foon," he said. In the newsletter, circulated in November but shared on Rapihana's Facebook this week, Grey Power member Siva Panadam apologised to attendees saying she "had no idea that Councillor Louis Rapihana did not speak English". A potty mouth Maori with a scribble on his face as he wishes to hide himself,  is complaining to an under-qualified idiot of a Chinese race relations commissioner (who didn't even know what he was meant to do when Sean Plunket first interviewed him) about an insult from an Indian from Whakatane? I cannot cope.  No one cares. No. One.  Other than they're paying hundreds of thousands a year for all these idiots appointed by th
1 comment
Read more
More posts