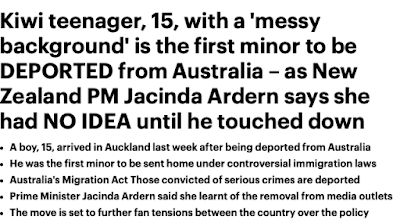 Many examples lately but this is an absolute cracker. The Australian Border Force usually shares details about deportees, including their criminal history or any gang affiliations, with New Zealand counterparts in police and corrections two weeks before they touchdown. However, Ms Ardern said she was not notified about the boy's case prior to his arrival but other officials were briefed. Of course not or she would have hollered, leaked it to media via her mates and Australia would be stuck with the little prick.  They have tried deporting minors before with no luck. Even Ardern's own officials did not tell her after being briefed! That is hilarious if true. The narrative we have in our head is some sweet innocent 15 year old kid with a halo over his head while liberals plead he is such a good boy. The reality will be that he is a 95kg behemoth with facial hair capable of propping up a scrum machine while looking 25 with a gang related violent background. Well played Scomo. We
Post a Comment
Read more
More posts