Good Work Crusher Someone Had To Do It 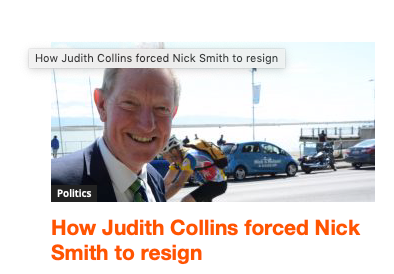 Richard Harman on his Politik site reports with surprise that Judith Collins might have kneecapped Nick Smith and inferring now this is somehow a scandal. Who cares if she did? Well done.  If she actually finally did the deed.  The fact of the matter is Smith should never have stood last election, he should have gracefully retired when there were calls for "renewal" with his legacy intact of not doing a lot but chucking tantrums, being protected by his mates like Bill English and having publicised "mental health" incidents making him completely unmanageable without kid gloves.   Then today we have Jake B izarre  Bezzant, who despite being a good looking young man, proved last election as having tits for hands, and more skeletons rattling in his closet then and still now than Narnia.  Whatever the truth of the allegations from a young woman who claims in excruciating detail about her experience with him, it is all b for bad for Bezzant.  Surely a young man with h
3 comments
Read more

Burn Of The Day - Shane Reti 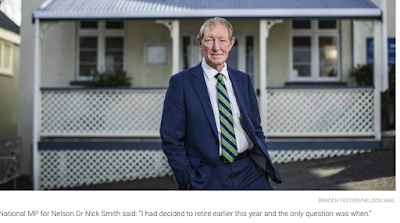 There will be no blue tears shed today. Smith was not at Parliament of the National Party’s caucus meeting on Tuesday morning. National Party leader Judith Collins was not present either, as she was attending her son’s graduation. National Party deputy leader Dr Shane Reti said he first heard of Smith’s resignation when it was announced in a press release. “I was surprised, then I pondered for a moment, and then I got on with my work,” Reti said. The problem with the National Party currently is that this is the sort of backhanded absolute epic burn that Judith Collins herself would have delivered when she used to be a) fun, b) have an opinion and c) behaved like an Opposition MP not an elder stateswoman in waiting...waiting....waiting. The question was when? Oh dear. How about at least before the last list was drawn up. Nick Smith's greatest achievement in politics will be a serious dialogue commencing about term limits.  Chris Finlayson on and Max Bradford kicked that off today.
3 comments
Read more
More posts