When Will Ardern And Bloomfield Tell The Truth About Vaccines? That There Are None.

Because Ardern fan-girl, Robyn Malcolm is a thought leader on the vaccine roll out, I decided to do some in-depth research called google (defined as more than anything a New Zealand journalist under the pay of the Labour government will report), for these amazing statistics. Andrea Vance had a whinge about the government.  A pity she did not do so for things that matter - like the publicly available failure of their blatant ineptitude in matters such as the vaccine rollout.   She was whinging about the government inconveniencing media by not feeding news to them readily enough when questions are asked.  There are and have been plenty of times the media can question Ardern and Bloomfield actual probing questions at 1pm pressers.  Where were they then? None have actually asked the pertinent questions.  When will the "year of the vaccine" actually start?  Registering for the vaccine is not feeling the pain of the juice in your arm. Jacinda Ardern's biggest and loudest suppo
4 comments
Read more 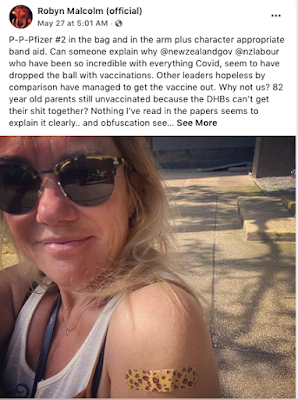 In a soon to be deleted series of posts, left-wing luvvie Robyn Malcolm quite justifiably has a great spew at the incompetence of the Labour government in delivering in the "year of the vaccine". The Labour government who gave her a New Zealand Order of Merit for pretending to be someone else acting, have let her down badly. I’m a great fan of Malcolm’s solely from her professional performance in Outrageous Fortune and own the back catalogue of DVD’s. When I met her I told her such and we were having a very convivial discussion the only way you can with the modern day woke far-left - by telling her how amazing she is. Then a mischievous interloper proceeded to tell her loudly that I was Cactus Kate and the leftie sour puss erupted in her and she got the pinko pip at me much to my amusement. She was later rather also great in the best Australian series ever Rake. So I’m having a giggle at yet telling her again how marvellous it is she is speaking out about these issues. Malcol
5 comments
Read more
More posts