You **** One Goat - Gladys Berejiklian's (Near) Fatal Attraction 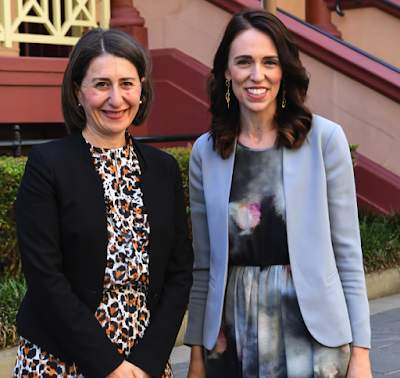 Poor Gladys is having a shocker of a week. The largest surprise reported out of Australia has been that she was shagging at all.  Widely known as a bit of a nerdy square, then out comes the revelation she has been slipping an entire affair in with a (sort of) married man who barely scraped in to the Northern Football League compared to her achievements and intellect.  Daryl.  I mean a name like that the bells should have been ringing. Pre-Covid in March 2020, Gladys was interviewed and let out in retrospect some real clangers. Ms Berejiklian, the eldest of three sisters, has long fielded curious questions, particularly from other women, about her personal life.  As she puts it, life just had other plans for her. "I think if an opportunity comes up you grab it. If something happens and you need to make a decision, make it. Had I met the right person? Of course I would be married. But that doesn't happen for everyone at the right time," told Mamamia. "I've always
Post a Comment
Read more

Crusher Upsets The Fat Activists Raging Against The Fatpocalypse!

Crusher has come out and upset the fat lobby by claiming they should exercise control over their own lives and that she should not have to as a politician.   The context which has of course been conveniently left out is she was asked to comment on a tax on foods that allegedly "cause" obesity.  No such food does this, the amount of total calories in your gob v what you expend does.  It is basic maths. She has been attacked for this instantly by the fat lobby and the usual snowflake university health "experts".  These people have created an industry of victimhood to a condition that has a very easy cure - STOP EATING SO MUCH. Finally a politician who is not pandering to "health experts" claiming obesity is anyone else's problem than that of the individual.   "I found Judith Collins' response to the story both heartless, but unfortunately not surprising," she says. "It fits in line with a larger neo-liberal project , which is about pos
4 comments
Read more
More posts