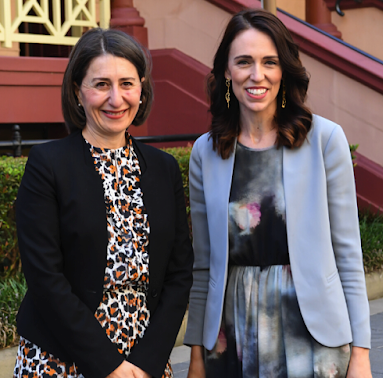 Forget He Puapua for a moment, the first real loss of sovereignty for "Aotearoa" New Zealand will not be to radical Maori extremists parading under the guise of academia, it will be its cornerstone Covid strategy currently governing the Nation.

In one weekend Gladys Berejiklian displayed why her polar opposite Jacinda Ardern did not wish to cede sovereignty to Australia until the very very last minute as has happened in the “transtasman bubble”.  It is also why her political opponents have pressed so hard for the bubble to be opened.  New Zealand will be governed primarily by more sensible strategy.

Gladys and Jacinda only have one thing in common.  They find men below their league dangerously attractive. 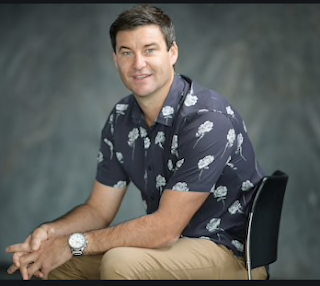 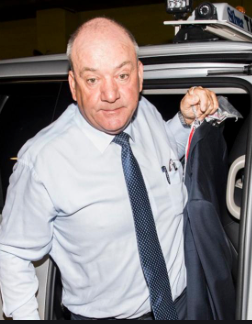 I wouldn’t say Gladys is particularly right wing. I would deem her a mild centrist on the political spectrum.  She is for example no Ruth Richardson.

Gladys stands almost completely still at her media briefings. She gets to the point without notes. She lets everyone know what’s happening and basically tells them in a polite way to "just behave". Jacinda sways back and forward, obfuscates with baby talk then passes over to her geeky Director General of Health. She then needs tame media to run interference for her. She won’t talk unprompted about anything. Gladys v Jacinda in a debate over Covid strategy going forward would be more brutal than the upcoming Floyd Mayweather v Logan Paul fight.

In the last political debate I have seen her partake in, Gladys humiliated her Labour opponent Michael Daley every second without really trying, starting from turning the sap down for dinner. He took me back to the days of David Cunliffe or Shearer such was the hopelessness.

Gladys is on about $A400k, Jacinda earns around $NZ470k. One of them is overpaid.

Gladys appeared publicly at the all powerful investigative beast that is the ICAC in the middle of a Covid response and gave answers to the context of texts and calls from the village idiot Daryl that as a right wing woman prone to terrible taste in men, with legal training who specialises in dealing with regulatory authorities and the expectations of Chinese contacts  - I know are rather “questionable”.

Daryl was such a mong that genuinely Gladys was sick of the boasts of promised riches from deals with the Chinese, like many "running dogs" do. Memo to Daryl: if you’re stitching deals for the Chinese you should be slicing at least 10% for the hassle if your intervention is the difference between the deal succeeding or not. Not a paltry $5k from a $5.8m deal or .086%. Gladys seems to be so unaware of the intricacies of Chinese corruption that she didn’t actually recommend to her mate now chinky running dog Daryl that he ask for a tad more hooter.  A $330 million deal, if running like a dog was required to get it over the line, Maguire should have been coining at least $20-30 million.  Not the pissy $1.5m he bragged of that he was going to use to pay some debt he had. It is little wonder the ICAC haven't gone to town on Berejiklian, it is not their first Chinese rodeo and know that the Chinese would have been playing Daryl like a violin left out for a rainy recycling day and he was talking it up trying to impress a much more accomplished female.

I am still waiting for transcripts from her with the words similar to  “dickhead, ask for more hooter”. There will however be no silver bullet. Endemic corruption requires a bit more intent than a woman who has heard of promises of riches large enough for long enough, that she can stop forking out for dinner for a man she is treating now like a comfie old shoe at the door.

But in an Australian context - one of the more politically corrupt jurisdictions historically in the western world, none of this matters to the punters. They have all seen worse. From almost always the men. Australia is not a country that bothers to partake in dirty politics. All their politics is one word - filthy.

In that crisis Gladys only reached out entirely by accident to women all over NSW who are smarter than their male partners and made them love her more for something many are guilty of - adopting a fucking idiot into their lives.

Putting this aside before I get comments about Gladys on that front from Aussie readers ......

This  week says everything in the difference between leader and strategy when left to their own devices.

NSW had a rando. A case of the Covid that even their experts cannot trace. Remember when Jacinda had such an issue? She locks the whole city down.

Gladys’ response, restrictions in Sydney that really do not matter that much

NSW Health said investigations were still ongoing into how a man in his 50s contracted the virus, before passing it onto his wife.

Most restrictions will remain in place across Greater Sydney (including Wollongong, the Blue Mountains and Central Coast) until May 17.

The following measures are in effect until 12.01 am Monday 17 May:

Visitors to households are limited to 20 guests, including children

Masks are compulsory on public transport and in public indoor venues, such as theatres, hospitals, and aged care facilities

Drinking while standing up at indoor venues is not allowed

Dancing is not allowed at indoor hospitality venues or nightclubs, however dancing is allowed at weddings with a strong recommendation of no more than 20 people on the dancefloor

Visitors to aged care facilities are limited to two people per day.

Patrons and customers do not have to wear a mask unless they are in the gaming area of a hospitality venue.

Where would you rather live?

Sydney and greater NSW, 3 times the land mass and 1.5 times the population, avoids proper lockdowns. When Gladys has a rando case now the response? Her experts get in there, contact trace, test and bring in the most minimal of disruptions. She actually trusts her own experts and systems to deal with it.

She then does what the National Party should be doing and chucks shade at Jacinda over shutting off flights as a reflex reaction in the bubble. 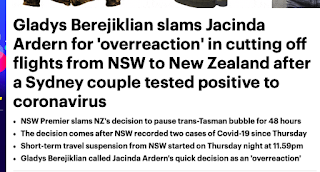 Every stand up, she mentions lovely  soothing words that should lead Scomo to get the hint that he needs to harden up and we need to “learn to live with Covid”. The linguistics surrounding are media messaging genius.  She manages also to chuck shade at Dictator Dan in Melbourne and Western Australia, a state almost beyond repair.

“Can everybody just be a bit calm today please,” Ms Berejiklian said, as reporters scrambled to ask her a question.

“This is a proportionate response to the risk. If we’d been able to identify the case in between, the missing link or links, of course we would have taken a different approach.

“But, we know for a fact there’s at least one person, if not more, walking around with the virus, not knowing they have it or potentially having attended many events and venues and that’s why it’s important for us to have a proportionate response.”

Ms Berejiklian said the Government was “not shutting down anything in NSW”.

“So any other premier shouldn’t even think about [shutting us out], absolutely not.”

Meanwhile Jacinda remains a slave to her polling from her close mates. Instead of actually leading the country and its Covid Karen’s to a more accepting strategy using her skills and popularity, it is Lockdown Lunacy every single time. Stockholm syndrome reigns.

Under Gladys’ not very strict rules for example, Daryl in Wagga Wagga will be able to still go today to the pub, stand up and dance with the only woman who will still speak to him, his mother, on Mother’s Day. He will be able to then show up at his ex-wife’s home and beg for her forgiveness while his children watch. Thanks to the Covid regulations, Mrs Maguire will then be able to physically leave the home and kick him in the slats several times, all without breaking the Covid laws.

Whereas in New Zealand a randie case unexplained, leads to paralysis.

The more New Zealanders want to travel to the best city in Australia for work and play in Sydney, the more they will understand there is a better way, a more mature way to deal with Covid and it is the Sydney way and not that of Socialist Cindy.

I doubt there will be or can be any more full scale lockdowns in New Zealand as a result of this leadership by Gladys.  The New South Wales way will now govern New Zealand's Covid response.